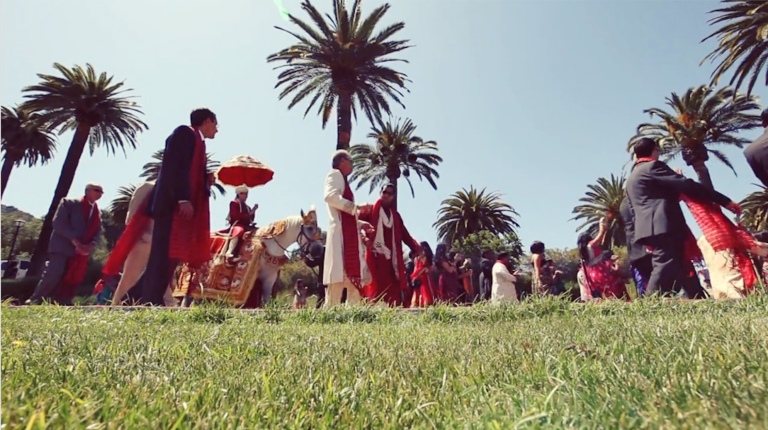 We normally would hear a lot of things from a wedding: perhaps sentimental wedding vows, meaningful blessings, great toasts… But we hardly ever hear confessions. At Shalin and Kanika’s wedding we hear not one but two confessions… from the groomsmen (in the highlight film below).
The first groomsman confessed that he was “WRONG” to judge and even to discourage the groom and say that their relationship probably “wouldn’t work” from the beginning. Yet the couple proved him wrong and showed him that love can come in many forms and perspectives and even sometimes look silly.
The second groomsman confessed that he owed a lot to the groom for his kindness and friendship through the years and he
never had a chance to express his gratitude until the wedding day. So he noted “And I think you deserve all the luck that will come into your life and Kanika is, and always be, your best luck of all.”

( Testimonial from the Bride ) We hired Dom as our wedding videographer after doing a ton of research and speaking with other wedding videographers. One thing that comes across right away with Dom is his passion and love for his work and after speaking to him in detail over the phone I knew I had found the right person. Dom is extremely detail oriented and keeps an eye on all the details from start to finish. On the day of the wedding, he and his team were there well ahead of time and they were already set up by the time we arrived. He also went above and beyond by providing an extra camera on the day to give us additional angles for our video, without me even asking for it or charging a fee. During the entire event Dom’s team was constantly filming and I don’t think I ever saw them stop to rest. Even after we left the event, they stayed on and recorded personal messages on video from our friends and family which was a surprise to use because we didn’t know it until we saw the videos. As for the finished videos, the quality was truly amazing and we can tell that there was a lot of hard work and care that was put into this. There were key moments during the event (such as first dance, bridal entry etc) when the audio quality from the speakers at our venue was not great, but Dom actually overlayed the video with the exact songs for that moment and even synchronized it with our dancing so you can’t even tell that it’s an overlay! He even takes care to package the finish product beautifully. In a nutshell, if you need a videographer for your event, Dom is the best person you could hire in my opinion. You won’t regret it. We certainly don’t and we’re very fortunate to have had his level of expertise and care for our wedding video. Thank you Dom and team!