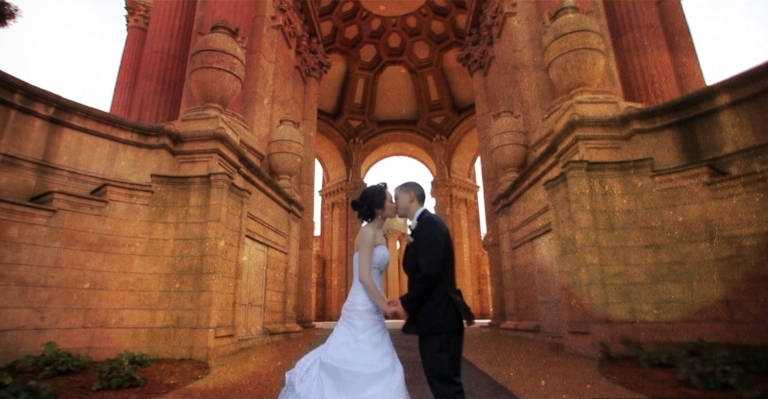 Once again even we had a great opportunity to shoot a beautiful wedding in a very exquisite place, the City Hall of San Francisco – the fifth largest dome in the world. But what makes this film feel more like a fairy tale to me is not the venue, but the love story behind it.

Once upon a time, when most of American were still using AOL (yes, it’s been a long time), Vincent and Susanna met in the same laboratory class. Vincent knew right then and there that there was something very special about Susanna yet he was too nervous to ask her phone number. So he asked her AOL name and asked her out on a date (more like a chat….online) and their story began. However, sometimes, life puts you to a test that could make or break your relationship: they had to spend 4 long years apart. Yet they managed to stay in love through a great, long time and distance. And here we are in one of the most majestic and fairly-tale-ish love stories ever!

( Testimonial ) We were one of those couples that took a lot of time with finding & booking our wedding vendors (ie photographer, videographer, florist, etc). After asking other couples and reading many reviews on yelp, we finally found Dom & Bay Area VDO. We were skeptical mainly because of the many other videographers we met with. However, Dom was the perfect person for our job! Initial Meeting: Dom initially put us at ease and took the time to listen to us and our preferences. He was willing to work with us regarding venues and what we looked for in final products. He showed us some of his finished work, which got us hooked. His final videos were superb – hard to describe – it’s one of those things that you just have to see. Dom was very professional throughout this entire process. We negotiated what we wanted, and Dom was very open to everything. After our initial meeting, we sent a few emails back and forth, and signed a contract. FYI, Dom’s agreement is 1/2 up-front and half at the final meeting (2-3 months after the wedding). I thought this was more than fair since it gave incentives to both of us. Wedding Day: Our wedding day started with the bridal party getting ready in a hotel suite – and sure enough, Dom showed up on time with his crew (he even traveled across the bay bridge!). From the first moments to the last, his crew was hardly noticeable – which was a definite plus. Dom rarely asked us to pose and kept the cameras running the entire time. He seemed to know where to put his crew at all times, and were out of the way of our photographers. This certainly wasn’t his first professional outing, which we appreciated. When we moved to our ceremony location, he moved with us with ease. Same goes for our reception. Sometimes I forgot about him, and it was nice not having to worry about him – he knew exactly what he was doing. Wedding video:
Dom had the video(s) done earlier than promised, which was a pleasant surprise. When we rushed home to watch it, the DVD was extraordinary. You could tell that he put A LOT of time into it – it was hardly a clip-and-insert job. The music was spot on and the footage was spectacular. Dom certainly is an artist and we appreciated his conservative approach to the videos. Particularly, the music video was phenomenal. We probably watched it over-and-over 10+ times that night, and still are in awe at how good thing this is. In short: It was nice not having to worry about Dom and his crew and knowing that they were doing their job well. Dom figured out exactly how to adapt to our situations and effortlessly captured our moments to our expectations. We both recommend Dom and Bay Area VDO wholeheartedly. Also, his price range is extremely competitive AND his final products are top-of-the-line, hands down.- Vincent