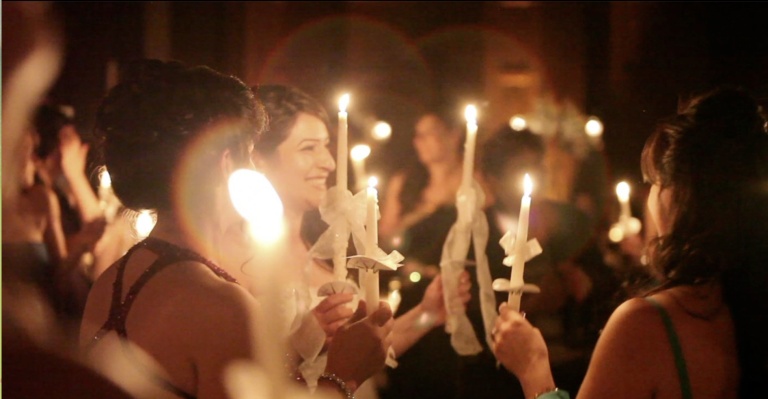 In my 7 years as a wedding cinematographer, this is probably one of the most bittersweet stories that I ever experienced. And it is NOT the story that appears on this video but what happened the morning after that makes this story worth sharing. It’s the true story that shows you how strong one’s love can be… the Love that gives one so much strength. As a matter of fact, the bride, Tina, just shared this story with me 2 weeks ago when she came to pick up her wedding video from me.
Just one month before Tina’s wedding, out of no where, her father got diagnosed with last-stage cancer and no one was really sure how much time they have left to be with one another. Tina even considered cancelling her own wedding. But one thing that kept her going was that her father kept saying, “Who will walk you down the aisle?”. Just one simple question but it kept both of them going. Her father kept holding on until the wedding arrived and he got to walk her down the aisle. So even though he was so fragile, his wish had been fulfilled. On the very next morning he passed away.
Now I understand why Tina picked this song for her music video. Even the music video just demonstrated the jubilance of this wedding but the song keeps singing, “We may only have tonight / But ’til the morning sun, you’re mine, all mine”. And this story of Tina and her father just gave a new, deeper meaning to this song. I know from now on, every time that I listen to this song, I will always remember Tina and her father and how their love carried them through the darkest hours and the most meaningful time of their lives.

( Testimonial )Hiring a videographer to capture our wedding was one of the most important decisions we had to make. This along with pictures and memories was going to be all we had after the big day. We met with several videographers and after seeing Dom’s work, speaking with him then finally meeting him, we knew we found our guy. Lets start with the reasons why. First off, his pricing was competitive and in our package we got 3 videographers for 12 hours!! That was what we needed to capture the day. (Other videographers had strict time constraints with additional charges after the time and 2 videographers, and that wasn’t fitting for me and my fiance’s wedding). With me getting ready to the guests at my house to the end of the reception with our cultural traditions, there is no way we could have someone for less time, or pay more for less. Also, Dom said he would be there to capture and he was. Sadly, I know some brides whose hired videographer sent their staff to tape instead of coming themselves. We sat down before the wedding and he took notes of what I wanted him to be sure to capture, which he did and leads me to my next point. We needed someone with multi-cultural experience. Dom had it. In fact, when I told him my ethnicity, he showed me reletive work he has done in the past. It was a relief to speak to someone who was exposed already to our traditions and knew from experience what to expect. Great way of knowing your audience Dom!!! Next, Dom gave us the final product up to 4 hours edited video and all the raw footage. This sounded way more appealing to us compared to others who would only sum it up to 45mn-1hour and charge extra if you wanted the footage!! This is the way I looked at it, it was our wedding, we want to see the moments and all the footage too. My fiance and I weren’t settling for less. It was actually a big big deal breaker for us. Lastly, he was so professional on the day of and timely with the final product. (we got our video and we have been married for less than 3 months). I know some people who have had to wait up to 1 year for their video.
Long story short, if you hire Dom, you will not be disappointed!!! – Tina